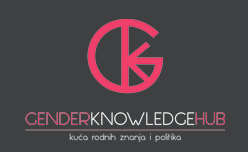 Gender Knowledge Hub (GKH) has been established in 2016 with the aim to contribute to production and dissemination of knowledge, specifically related to gender relation, gender policies, engendered reality in social, economic, political areas and to support further contribution of expertise in the field of gender equality. One of the principles and the light motive of foundation of the organization, was the intention to close the gap between practitioners and scholars but also knowledge production and decision making. This is why we work on public advocacy for gender responsive policies, gender budgeting, capacity building programmes for decision makers and civil servants at the local and national level. Therefore the mission of the organization is development, promotion and strengthening the expertise in gender equality and gender mainstreaming with the ultimate goal of influence of public policies that will contribute to gender equality and improvement of women’s position.

The core of GKH work is gender mainstreaming and gender responsive budgeting and the expertise in this field is the strongest side of the organization. The GKH team are consultants o with over 15 years of experience, with proven track records in conducting gender analysis, researches and surveys, training and other capacity building programmes development and delivery, providing direct mentoring support to governments in organization on introduction of GRB and gender mainstreaming.